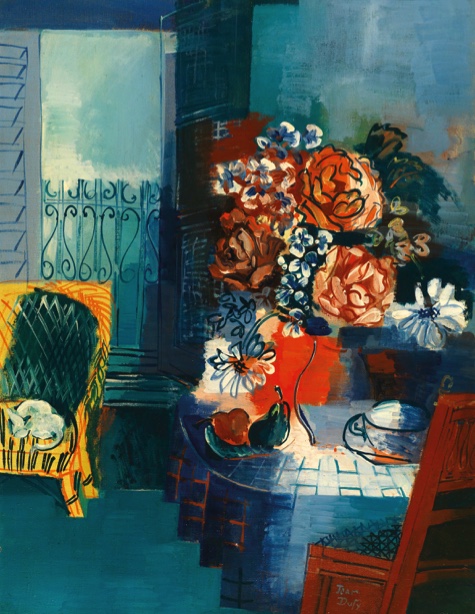 THE PAINTINGS INTERWOVEN WITH MUSIC AND COLORS: JEAN DUFY

With ten years age difference, the Dufy brothers, Raoul Dury and Jean Dufy, are two big figures in the French art history. The older Raoul is one of the most renowned fauvism artists and important mentor of his younger brother Jean during his artistic career. Jean Dufy's painting style is considered post-impressionistic with strong musical elements. As a unique emblem on the early 20th-century French art scene, his paintings used vivid colors to depict subjects such as the post-war French society, urban landscape, circuses, concerts, summer sailing competitions, and jazz.

Born in the Northwestern French dock city Le Havre in 1888, Jean Dufy went to Ecole des Beaux-Arts du Havre with his older brother Raoul. At the Cercle de l'Art Moderne exhibition in 1906, his aspiration to become an artist was ignited by many artists, including Henri Matisse, André Derain, Albert Marquet, and Pablo Picasso. Henri Matisse's Fenêtre ouverte à Collioure particularly enlightened and inspired him by the bright lighting and vivid colors of the painting.

In 1912, Jean Dufy followed his brother's step and came to Paris. With Raoul's introduction, Jean met many post-impressionism artists, including André Derain, Georges Braque, and Pablo Picasso. In 1914, He had his first solo show at Galerie Berthe Weill in Paris. The gallery had scaled the heights as the frontiers of the 20st-century avant-garde art. Many emerging young artists back then had their first show there. Besides the Dufy brothers, Picasso, Matisse, Jules Flandrin, and Georges Rouault also exhibited there.

After the First World War, Jean Dufy moved back to Paris and lived in Montmartre. He was a neighbor to Braque, who shared with him the ideas about Cubism art. In 1920, he painted the background for musical Le Boeuf sur le Toit. With this occasion, he was able to meet some of the most celebrated musicians at the time, Les Six, including Milaud, Auric, and Satie. Music brought his art into a new transformation and was the major factor of the novel choices of colors he had. To him, colors were the music and language gracefully dancing on his canvases.

Over the course of thirty years, Jean Dufy worked on the ornament design for Theodore Haviland in Limoges. He specialized in animal and floral pattern designs. In 1925, Exposition Internationale des Arts Décoratifs et Industriels Modernes was held in Paris and Jean Dufy won golden awards with the Châteaux de France cutlery design.

The painting Bouquet de fleurs dans un intérieur bleu was Jean Dufy's most representative work. The composition displays a collage of colors, which manifests the artist's talent with colors. The heavy strokes of blue, green, yellow, and red color blocks dissolve on the canvas and were livened by the outlines. With its strong decorative characteristics, the painting captured the genuine dynamic and impression of the moment more than a realistic depiction of the still life. It successfully immerses people in the glorious beauty of color and light. Jean Dufy preferred white and he used this color to depict a teacup, table cloth, flowers, and a cat in this painting. These objects scatter in the frame with a balanced composition. The sophisticated use of lights directs the viewers to the white table cloth. An abundant bouquet of flowers is like floating on top of it, dancing, moving, and contrasting with and stillness of the interior setting.

Many of the world-acclaimed artworks by Jean Dufy are now exhibited in the major art institutes in North America and Europe, including the Paris Museum of Modern Art, The Centre Pompidou, The Albertina, Vienna, The Art Institute of Chicago, and The Museum of Modern Art, New York.
Related Info