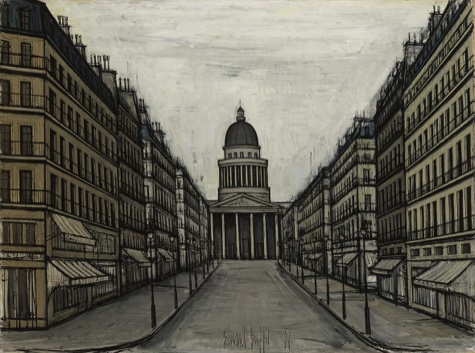 LE PANTHÉON IN BUFFET'S EYES: A SYMBOLIC EMBODIMENT FOR THE HUMANITIES

Known as the "successor of post-war realism", Bernard Buffet was a genius who was highly appreciated by both Pablo Picasso and Andy Warhol. His works of art have seen consistent success at auctions in recent years, attracting widespread attention throughout various circles. This autumn auction will feature La Rue Soufflot et le Panthéon, which was created by Bernard Buffet in 1956 and has been an important item of private collection since the 1950s. This debut auction will provide a rare opportunity for collectors to purchase it. According to the records of Buffet's works over the years, the Paris Landscape series produced in the 1950s is considered a historically representative landscape series with the highest appraisal and greatest market potential. In particular, his repeatedly record-breaking La Eiffel Tower resulted in a hammer price exceeding a million dollars in 2016, placing it third in the records of the private collection of his works worldwide.

Strolling over the left bank of the Latin Quarter of Paris, pedestrians are able to easily experience a thick humanities atmosphere, with magnificent buildings rising straight from the ground. The Panthéon jumps into their vision as they cross the Luxembourg Gardens and walk along the Rue Soufflot street. As symbolic embodiments of French culture and humanities, these buildings radiate an enormously solemn beauty that speaks to the great contributions made by distinguished French citizens across generations for the progress of the country and even human culture. The Panthéon also serves as a source of creative inspiration for artists. Whether that be the Paris landscape under the painting brush of Van Gogh and Manet, the Inside out-Au Panthéon! Art Project produced by contemporary artist JR in 2014, the limited-time art show Ice Watch co-organized by contemporary art masters Olafur Eliasson and Minik Rosing in 2015, or the La Mécanique de l'Histoire completed by the contemporary dance star Yoann Bourgeois in 2017, they brim with the admiration and respect of artists for the Panthéon regardless of the changes through history.

Recording what he saw with a brush by sketching his unique aesthetics into beautiful chapters, Buffet managed to translate an artist's subjective feelings into paintings. He exhibited the Paris Landscape Series at his personal annual exhibition in Galerie Maurice Garnier in 1957. As commented by the well-known poet and art critic Jean Cocteau: "The exhibition is first rate. A large number of Paris images, all naked, seemingly pulled away from any lives without traces of human presence left. The proof that a painter is a painter is when everything starts to look like his painting... After the visit (evening was falling) I saw the city with Bernard's eyes.” Should an artist attempt to strike a chord with viewers' hearts through history and going beyond the aesthetics of buildings themselves, the artist must break through the long-standing stereotypes of viewers. This is a challenge just like walking on a cliff edge, reaching a mountaintop, or falling into the valley bottom.

Born in Paris, Buffet reached the pinnacles of his artistic career in the 1950s and the 1980s, respectively. He created a series of landscape paintings featuring significant historical buildings in Paris, including the Eiffel Tower, Pont Alexandre III, Palais Garnier, Place Vendôme, Basilique du Sacré-Coeur de Montmartre and more. Since childhood, Buffet held a keen interest in architecture, and explored the beauty of architecture during his studies at École nationale supérieure des Beaux-arts de Paris. Hailed as the crown jewel of European architectural history, Paris has undergone centuries of evolution and expansion, while preserving the masterpieces of architectural masters, witnessing the evolvement of history, and even surviving the baptism of World War II. Buffet, an artist and witness who had an unbreakable bond with Paris, drew inspiration from the city. It is no wonder why he was so fascinated to express his deep memories of Paris with his brush.

The visual angle of La Panthéon expands to the center of the perspective point along the juxtaposed buildings at the sides of the Rue Soufflot Street, so that viewers feel as if they are standing on the street, looking up at the Pantheon at the end. As the slope gradually goes up, the viewers embark on a travel through time, immersed in the magnificent feats. Intricately woven lines in geometry reveal rationality and indifference, while the varying tones with painting grayscale link the hovering skylight layout with the dark shadows of the buildings, making viewers sense a faint existential melancholy well up in their hearts. The tone variance narrates the young artist's sense of delicacy and keen insight into viewer's emotions that guides them into the scene. An introspective dialogue is initiated between the painter and viewers on why there are no people or vehicles on a street that should be bustling, replaced with a sense of alienation. The buildings' domineering occupation over the center of the painting forces viewers to face the empty city directly. Like the empty husk of a person without a soul, the painter expresses his disappointment towards humanity and his grievances regarding war.

Buffet was granted the Prix de la Critique by Galerie Saint Placide in 1948, rated as the top of“The Ten Best Post-war Artists” by the magazine Connaissance des Arts in 1955, and awarded the French Knight Medal of Honor in 1971. In 1973, the Bernard Buffet Museum was founded by Kitaro Okano in Surugadaira, Japan, so that the artist's outstanding achievements could be recognized across the world. Seen from the macroscopic perspective of the art market, few painters can rival Buffet, whose works are being passionately sought after by collectors and enthusiasts across the world. Furthermore, in recent years, the world has seen a steady increase of Buffet's works that repeatedly break records in transaction volume at auctions. As a result, their continuous rise in value is very foreseeable.
Related Info