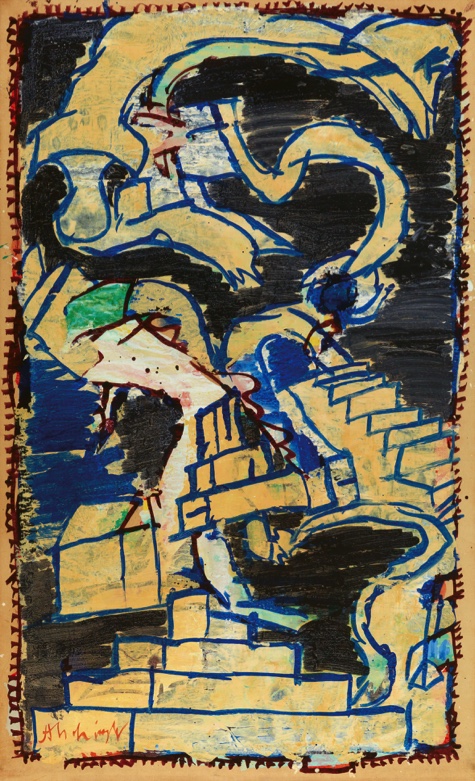 Oil on paper and mounted onto canvas

There is a deep connection between the CoBrA movement and Taiwan, where important historical moments for modern art in the West and Taiwan happened. In 1989, their works were exhibited for the first time in Taiwan. In 1992, the Taipei Fine Arts Museum held a retrospective exhibition for Alechinsky’s prints. In 1994, Karel Appel’s retrospective exhibition was held in the Kaohsiung Museum of Fine Arts. Later, in 1999, in celebration of their 50th anniversary, the two museums held retrospective exhibitions dedicated to the CoBrA movement, inviting Guillaume Corneille (1922-2010) to attend in person (see lot 037) and meet with many Taiwanese scholars and artists. Pierre Alechinsky, an important member of the movement, befriended Chinese-American painter Walasse Ting in 1954. The two travelled to the US in the 1960s, linking the art community of Paris with that in New York City. In the 1980s, Taiwanese artist Chen Cheng-Shiung went to Europe to host an exhibition, and met Alechinsky and other members of CoBrA. His early works were also inspired by the movement.

With Jean Dubuffet's masterpieces trending on the market in recent years, all the groups chronologically related to the Art Brut movement are coming back into the spotlight. In November 1949, a group of poets and painters from Copenhagen, Brussels and Amsterdam formed the CoBrA movement, with the initials of their respective cities as their name. As a crucial part in post-war art development, the CoBrA movement emphasizes on returning to the early stages of humanity, and to inspire the inherited art instinct that human beings lost in civilization. The movement rejects the formalism paintings of the Western world, and instead promotes Eastern calligraphy, aboriginal art, children art and Art Brut, which have all become inspirations for CoBrA artists.

Alechinsky, who is of Jewish origin, was born in Brussels, Belgium in 1927. During Spring 1949, the young Alechinsky attended the first exhibition of CoBrA artists in Paleis voor Schone Kunsten, Brussels, and was invited to join the movement by“The Mentor” of the movement, Christian Dotremont. The studio he shared with Raymond Cossé later became a location for important CoBrA meetings. In the early 1950s, he acquired a French scholarship to extend his study in Paris, where he met Walasse Ting and Japanese calligrapher Shiryu Morita. During this period, he began his research into Eastern arts and culture, which influenced his use of creative material and styles greatly. In 1961, Alechinsky's documentary clip Calligraphie Japonaise was awarded in Tokyo. He later went to New York City and borrowed Ting's studio to work, as well as hold his first solo exhibition there the following year.

The Castle of Ocre was created by Alechinsky in 1994, when he was inspired by the ruins of the medieval castle in Ocre, southern Italy. This particular work was bought by a private collector upon completion, and hasn't been seen in public until now. The usage of past experience and the relevance of its context in this piece proved the later view that a work of art is made by an artist who is mixing experience with imagination, shifting between the past and present, and wandering between reality and dreams. In his early years, Alechinsky obtained education from art schools, where he was inspired by the ideology of the era. As a result, his style transcended the trend of expressionism in Belgium at the time as well as French surrealism. It even caused the CoBrA movement to become freed of any established norms, while freely accepting and absorbing elements of folklore and myth into creative elements.

The Castle of Ocre utilizes the quality of paper for the spread of paint, allowing the artist to better depict curved silhouettes. Perhaps partly due to the reason that the artist was not constrained by the calligraphic training of Eastern characters, he was able to fully rely on his instinct to control his brush and create a brand new style. By being passively limited by unfamiliarity to the medium, he was able to liberate himself from the boundaries given by his education, and fully rely on his senses and the image in his mind to complete the work with a pure and rough style close to that of a child. The structure of the piece is hidden beneath the silhouettes, which magnifies the recognizable stair geometry to force the viewer's focus there. The experience is similar to the progress of climbing a mountain castle, or to the expression of a Chinese shan shui scroll. When we see the work as a whole, the artist's boldness becomes clear in not following the traditional structure of Western painting by reducing the sense of a clear, meaningful subject. Aside from marking a change in creative practices, this also challenges the viewers' pre-existing habits and knowledge, asking them to proactively take part in the artist's creative concepts and core ideology.

Alechinsky's artistic achievements were quickly recognized and acknowledged by scholars. Invited by the École nationale supérieure des Beaux-arts de Paris to join its faculty, he worked there from 1983 to 1987. Museums from around the world also invited him actively, from the retrospective exhibition in Paleis voor Schone Kunsten, Belgium in 1969, the Louisiana Museum of Modern Art in Denmark, to participating in the 36th La Biennale di Venezia on behalf of Belgium with Dortmund. He also held solo exhibitions at Carnegie Museum of Art in Pittsburg, USA in 1977, Musée National d'Art Moderne of the Centre Georges-Pompidou in Paris in 1978, Museum of Modern Art and the Solomon R. Guggenheim Museum in New York City in 1987, as well as Musée de l'Orangerie, Paris in 1988. Between 2018 and 2019, Alechinsky also accepted Vienna State Opera's invitation to celebrate his 90th birthday, where he participated in the contemporary art project and applied his designs on the opera house's stages.