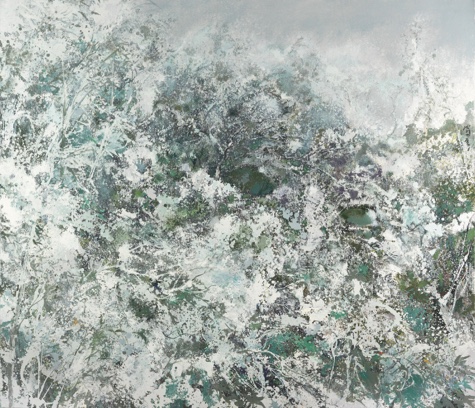 Hong Ling’s paintings utilize oil-stacking to construct landscapes. The vivid artistic conception of mountains and rivers embody the spirit of Western abstract expression, while also harboring the connotation of “Creation from the dialectical unity of naturalism and internal comprehension”. Hong uses his unique Eastern language to construct his own independent spiritual painting space with the help of Western media. He values the characteristics of oil painting materials as a medium, and uses the Chinese perception towards nature to express his own landscape oil paintings. Amidst resemblance and non-resemblance, Hong expresses his individual life experiences. His landscape paintings have always had the remnants of natural objects, and being invariably rich in color, the subtle chromatic aberrations bring out a natural aesthetic much like breathing. Sometimes they feature broad ambiguous ambience, utilizing dripping "defects" to produce the general atmosphere. At the same time, the Western perspective is not limited to the lights and shadows that change with time, abandoning the visual expression of the landscape to enter a contextual subjective construction. He draws on the traditional painting styles and technical methods, integrating them with Western oil painting art to create artworks with the aesthetics of Chinese painting. They serve as attempts to launch the inception of Eastern cultural spirit, and regenerate and gradually establish its own landscape language system. He is one of the few artists in the Chinese art scene who can represent the spirit of Chinese landscape culture.

Hong Ling likes snow scenes, from the first snowfall to auspicious snow, the freezing temperature to the snow marks, the snowy sky to the final snowfall, and high snow to residual snow. Hong Ling seems to have revived all the snow scenes of the entire traditional landscape painting in his own style. The work, Snowscape, is one of Hong Ling’s prime works. The picture is presented in a white, ethereal and vibrant snow scene, which is repeatedly stacked and dragged, so that the layers of color overlap and contrast layer by layer. The resulting mottled beauty of the color layers seeks ethereal in dignity, flickering among the dots. Hong Ling focuses on the illusion of reality and virtuality. In his works, clouds, fog, water, and snow intersperse as shapes. The organized canvas forms a holistic tone of ambience, illustrating the images of the soul reality and virtuality, as well as rigidness and softness, manifesting the spiritual image of the vast mountains and waters.