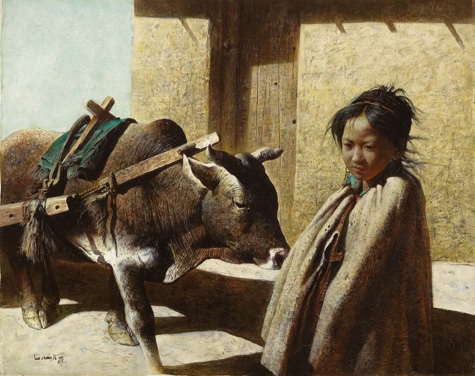 The Cattle and the Child

This painting is to be sold with a photograph of the artist with this lot.

PROVENANCE:
Acquired directly from the artist in 1991 by the persent owner

Chinese Rural Realism paintings emerged in the early 1980s, and they had once been a main focus in the Sichuan school of painting during the last century. In the 1980s, different schools of art such as “scar art” and “Rural Realism soil art” were created as a result of historical reflections and ethos recollections. Under the background of such an era, Chinese art creation also progressed into a “new period.” The Sichuan school of painting came to a rise because the Sichuan Fine Arts Institute was subjected to fewer restrictions, and the dynamic academic atmosphere from intense collisions between humanities and artistic ideas at that time cultivated a group of famous contemporary artists. In the Chinese art community, artists such as Luo Zhongli, Zhou Chunya, and Zhang Xiaogang are specially called the “phenomenon of Sichuan Fine Arts Institute.”

“I need a certain amount of workload to train myself and accumulate experiences. And I have always painted farmers in Rural Realism-related themes as my lifework.” — Luo Zhongli

In recalling the original intentions of his creation, Luo Zhongli once expressed his aspiration to speak for these honest, neglected farmers as they always get the short end of the stick. This profound personal experience and strong sense of mission are exactly what brought the rich emotions into his works. In 1980, Luo Zhongli’s artwork titled Father became widely acclaimed in China. By focusing on the true meaning of art and depicting the reality of an era, he led Native Soil paintings and the Sichuan school of painting to achieve a new milestone, reaching a new high in Chinese contemporary art history. In addition, Luo Zhongli delicately portrayed the image of a Chinese farmer by demonstrating photographic realistic details at a large scale that used to be only permitted for major historical themes. The artwork touched tens of millions of people at that time.

Auctioned for the ﬁrst time, "The Cattle and the Child" beautifully display the styles from different stages of his career. "The Cattle and the Child" was created in 1991 in depicting the real looks of farmers in Daba Mountains and re-illustrating the regional way of living. The delicate expression redeﬁnes the philosophy of culture
through the portrayal of farmers' life. The painting captures a still and gentle moment: the girl and the yak, along with a delicate display of sunshine and shadow that combine to form an immersing country atmosphere. The girl slightly bows her head and seems to be pondering; she looks young but also has some sophistication
from experience. The characters' abundant layers, skin textures, and the detailed depiction of the yak's solid physique make the entire painting look vividly real. Together, the interactions between light and shadow, stillness and harmonious colors, in addition to exquisitely realistic methods of expression create the most poetic demonstrations of simple country living.