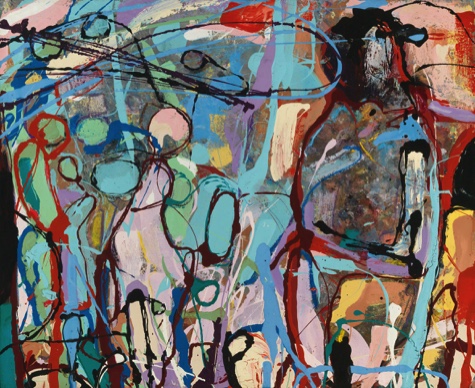 The Dance of the Midnight Samurai

Sacha Jafri was born in 1977 in the UK. His great-great grandfather was one of the maharajas of India; his grandfather was close friends with Gandhi, and his father a diplomat, whose final post was in London. Immersed in the high society, Jafri studied at Eton College, counting Prince William as fellow. In 1999 he received his BA from Oxford University, awarded The 2000 British Painters Prize, and rose to international prominence. Celebrities including David Beckham, Barack Obama, Bill Gates and George Clooney are among his collectors. In 2008, he had his 10-year Retrospective World Tour visiting the top museums of the world. In 2009, he exhibited alongside S. H. Raza, M. F. Husain and Anish Kapoor during the exhibition Indian Greats taking place at the Rayal Academy, London. Commissions include The 2012 London Olympic Painting on view at the Natural History Museum in London.

The Dance of the Midnight Samurai completed between 2004 and 2005 showcases Jafri's unique personal artistic style. The picture is colorful, vibrant, and energetic. The color and form embody intangible energy. The image is composed of magical lines swaying on the surface of the canvas, with figurative elements that seem to remain. The composition is seemingly random and visually arresting.“I want to be the Kandinsky of my time”, the artist said. In fact, he has been credited with inventing the genre of“magical realism” in art. Using an experimental approach and extraordinary imagination, Jafri oscillates between abstraction and figuration. Global politics, shared experience and cityscapes are recurrent themes of his creation. His practice also combines curation and performance. Jafri has recently been described by New York Times and Financial Times as“a shrewd investment”. He currently lives and works in Dubai.
Related Info